Discovered in 2005, the Falcarius is believed to be a link between the typical carnivorous theropods and an unusual group called the therizinosaurs, which are believed to have eaten plants rather than meat. Falcarius itself is believed to have been an omnivore. It is not known for certain if it had feathers, but other primitive therizinosaurs had them. Therizinosaurus was, naturally, a therizinosaur, but later lived in the Cretaceous period, in Mongolia. Utahraptor lived in the same time and place as Falcarius, but was a carnivorous theropod belonging to a group called the dromaeosaurids, known for being agile predators with sickle-shaped claws on their feet. It may have had feathers, as a few other dromaeosaurids and their relatives did. Garudimimus was an ostrich-like dinosaur (ornithomimosaur) that lived later than Falcarius, and was found in Mongolia like Therizinosaurus. It had a small head and long neck, like Falcarius and other ornithomimosaurs, but unlike most other ornithomimosaurs, it had teeth. 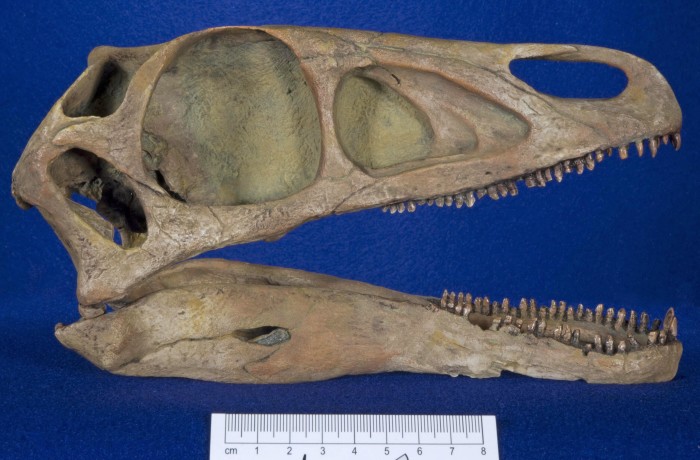 The truly strange looking animal above is Falcarius utahensis. It’s an early, omnivorous member of the theropod clade known as therizinosaurs. Not only does it look weird, it’s also a bit different from other skeletals you may have seen on the web.There are still several points worthy of discussion.First off, the animal was discovered in a bone bed of disarticulated individuals.
The good news is that most of the individual elements are known, but the down side is the bones aren’t all from the same sized animals. That means that cross-scaling is needed to restore the skeleton, but even that presents a challenge; the usual method of cross-scaling involves double-checking the results against the proportions of close relatives. Alas, in this case the fossil record for the base of the therizinosaur family tree isn’t well known, and what is known makes it clear that Falcarius has very different proportions than its closest known relative: