T. Rex was a “tyrant lizard king” is one of the most fearsome killing machine in the history of life on earth,full-grown adult weighed in the neighborhood of seven or eight tons and is equipped with a massive muscular jaws filled with sharp, shearing teeth. For all that, though, there is still some disagreement about whether T. Rex actively hunted for food, or scavenge dead carcasses. 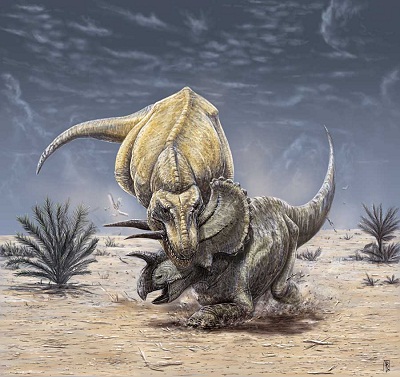 All theropods (the family of meat-eating dinosaurs that includes T. Rex) looked vaguely alike, but Triceratops cut a more distinctive profile. This dinosaur’s head was one-third the length of its entire body some preserved skulls measure well over seven feet long and it was adorned with an expansive frill, two dangerous, forward-facing horns, and a smaller protrusion on its snout. An adult Triceratops weighed about three or four tons, or half the size of this dinosaur’s T. Rex nemesis. 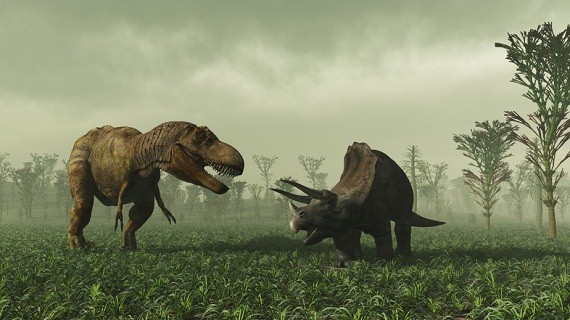 Triceratop  Hobbled by its puny arms, T. Rex requires a few precious seconds to lever itself off the ground by which time Triceratops has lumbered up on all fours and darted off into the brush. Somewhat embarrassed, T. Rex finally gets back up on its own two feet, and stomps off in search of smaller, more tractable prey or perhaps the nice carcass of a recently deceased hadrosaur.