Massospondylus was a herbivore (plant-eater) that lived in South Africa and North America, about 208-204 milion years ago, during the early Jurassic period.

Massospondylus has a height of about 13 feet (4 meters), and was named by Sir Richard Owen meaning “large vertebrae” or “elongated vertebrae” (seen from the large bones in the creature’s neck).

Massospondylus has a small head at the end of a very long neck and flexible. His hand has five fingers, can be used for walking and grasping, and the thumb, each equipped with large claws. 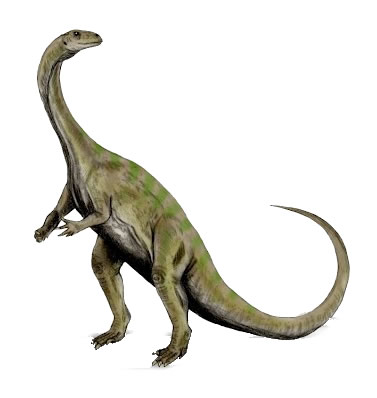 Polished stone have been found in Massospondylus skeleton. Just like many birds do, Massospondylus is believed to have swallowed stones to help grind food difficult. When the stones are worn smooth and no longer useful, Massospondylus would spit and swallow stones rough stones to replace them.

In 1970 six Massospondylus eggs found in South Africa. When the eggs are finally opened and fossils extracted after 30 years of waiting, the eggs were found to contain near-hatchlings without teeth. The lack of teeth has led some scientists to conclude that some degree of care after birth may be necessary, because the hatchlings may be able to feed themselves.